So, which will triumph tomorrow when the Man Booker Prize winner for 2014 is finally announced? Head or heart? My heart wants it to be Richard Flanagan’s harrowing but deeply moving historical drama The Narrow Road to the Deep North largely focused on Australian prisoners of war building the Burma Railway. A close second would be Karen Joy Fowler’s stunningly original and at times very funny We Are All Completely Beside Ourselves which also raises some important and difficult ethical questions.

My head says it will be Howard Jacobson’s bleak, dystopian J or possibly Neel Mukherjee’s The Lives of Others a sweeping masterpiece about the decline of a family, set in the 1967 Bengali famine. But like everyone except the judging panel, I haven’t really got a clue, such a lottery are these competitions and so strong were all the shortlisted writers.

Despite the doomsayers warning that once the prize was opened up to American writers it would be dominated by the Stars and Stripes, the short-list was fairly balanced both geographically and as a literary offering. Two Americans, an Australian, an Indian and two from Britain.

I was initially put off Ali Smith’s innovative How To Be Both by the enraptured outpourings “it’s a fast-moving genre-bending conversation between forms, times, truths and fictions”gushes the cover, as well as the game-playing that saw it released in two forms, alternating the story’s time line. But it proved to be intensely thought-provoking and sensitive. However, I think it is a tad too self-conscious in its intricacy and complexity to win.

Joshua Ferris’s To Rise Again At a Decent Hour about a New York dentist whose life in hijacked on the Internet is a fabulously funny read yet with deeper, more intense overtones and more than a passing nod to Philip Roth. I was surprised it made it onto the shortlist simply because it just didn’t seem Bookerish.

I was pleasantly surprised when I enjoyed Howard Jacobson’s J far more than expected. To be honest, I hated The Finkler Question and rather resented (a) having to finish it and (b) it winning the Booker in 2010 and wasn’t looking forward to wading through another. I was wrong. J takes place slightly in a future where fear following some unexplained civil cataclysm becomes a more powerful controller than any uniformed force or barred windows is quietly but effectively sinister.

In what seems to me one of the closest contests for a very long time I wouldn’t really be surprised if any one of the six finalists tomorrow takes home the $A91,000 prize (except perhaps Ferris.) What was perhaps most rewarding is that all showed that it is possible for authors of literary novels to pay as much attention to creating a highly original storyline as to framing it in perfect prose. 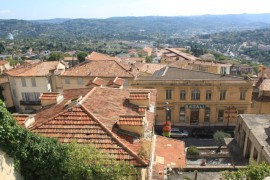 On the scent of something exotic in Grasse, France, perfume capital of the world
Ricard Flanagan wins Man Booker Prize with The Narrow Road to the Deep North
Navigate
Follow