Australian literary heavyweights Joan London, Liane Moriarty, Peter Carey and Helen Garner are all included in the shortlists for the 2015 Australian  Book Industry Association awards announced today. There are 11 categories this year including two new ones specifically targeting small publishers.

General Fiction Book of the Year:

Literary Fiction Book of the Year:

When the Night Comes by Favel Parrett, Hachette Australia.

General Non-fiction Book of the Year:

Where Song Began: Australia’s Birds and How They Changed the World by Tim Low, Penguin Random House.

This House of Grief: The Story of a Murder Trial by Helen Garner, Text Publishing Company.

Biography Book of the Year:

Optimism: Reflections on a Life of Action by Bob Brown, Hardie Grant Publishing.

A Bone of Fact by David Walsh, Macmillan.

Noni the Pony Goes to the Beach by Alison Lester, Allen & Unwin.

The Last King of Angkor Wat by Graeme Base, Penguin Random House.

Illustrated Book of the Year:

What a Croc! by Nt News, Hachette Australia.

International Book of the Year:

We Are All Completely Beside Ourselves by Karen Joy Fowler, Allen & Unwin.

Not That Kind of Girl by Lena Dunham, HarperCollins.

All the Light We Cannot See by Anthony Doerr, HarperCollins.

Only the Animals by Ceridwen Dovey, Penguin Random House.

The Voice: My Story by Ray Warren, With Andrew Webster, Black Inc.

Diary of a Foreign Minister by Bob Carr, NewSouth Books and Publishing.

How I Rescued My Brain by David Roland, Scribe Publications.

Captain Thunderbolt by Jane Smith, Big Sky Publishing.
A Secret Safe to Tell by Naomi Hunter, JoJo Publishing.
Tea and Sugar Christmas by Jane Jolly, National Library of Australia.
I Could Wear that Hat! by Ben Sanders, Thames and Hudson. 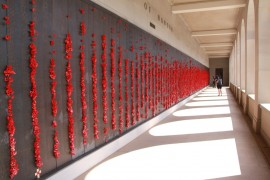