Three debut novels, by Emily Fredlund, George Saunders and Fiona Mozley, are among the 13 books on the long list for the Man Booker Prize 2017 which has just been announced. The shortlist of six books will be announced on September 13 and the winner of the GDP50,000 award, on October 17. The list is: 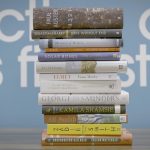 Chair of the judges, Baroness Lola Young said that together, the long listed authors  “both recognised and new — explore an array of literary forms and techniques, from those working in a traditional vein to those who aim to move the walls of fiction.

“Only when we’d finally selected our 13 novels did we fully realise the huge energy, imagination and variety in them as a group.  The longlist showcases a diverse spectrum — not only of voices and literary styles but of protagonists too, in their culture, age and gender.  Nevertheless we found there was a spirit common to all these novels: though their subject matter might be turbulent, their power and range were life-affirming – a tonic for our times.”