Jon McGregor‘s much anticipated novel, Reservoir 13, has all the ingredients for a thriller: mysterious 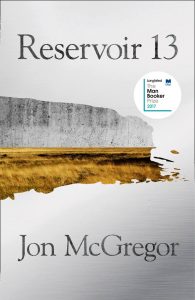 disappearance of a 13-year-old girl, mesmerising but brooding landscapes, close-knit community, dodgy characters, illicit relationships. And of course: Secrets. What he delivers is an elegant, almost poetic rendering of the evolving impact of a tragedy, not just on the family involved (indeed, they are given a peripheral role) but also on the village community in England’s charismatic Peak District.

The disappearance of Rebecca Shaw, Becky, Bex, becomes the defining moment in the village’s identity. At first, it galvanises the residents to join the official search party, with the initial expectation that the girl, who had been on holiday with her family, will be found. Inevitably, reality takes over the reader. Like the locals we prepare ourselves for the fact that she will not be found alive; it is her body that will be found. There is suspicion. Guilt. Gossip. But slowly time moves on. Even as tension ebbs and flows, McGregor’s narrative, in short snapshots, seamlessly entwines the intricate web of daily life with the sensual progress of nature.

“The girl’s mother was seen on the side of the moor, walking the same paths and tracks she’d always walked. There was more rain on the way, or worse. A cold wind blew shadows across the reservoirs and on the higher ground a flurry of thin snow whirled against the tops of the trees. The goldcrests fed busily deep in the branches of the churchyard yew.”

As the months pass we learn of butcher Martin Fowler who eventually loses his shop and his marriage; National Park ranger Graham Thorpe and Sally discover more in common than just butterflies; BBC journalist Su mourns her career even as she celebrates her family. Schoolboy James Broad finally admitted to his parents how much time he’d spent with Becky Shaw before her disappearance. The Jackson brothers realise that whatever their aspirations, their future remains with their sheep herds.

As the book progresses McGregor subtly teases us, letting the tension rise and subside. Even as the calendar turns over to each New Year, as memories dim, we still anticipate that on the next page, Becky’s body will be found. Reservoir 13 is a terrific read; both sensual and tense. McGregor’s staccato sentences, juxtaposing characters and nature, showcase a writer in complete control of pace.

Reservoir 13 by Jon McGregor is published by

Man Booker longlist 2017: from the traditional to writers aiming to “move the walls”
The bottlebrush outside my house is in bloom and we’ve had visitors all day 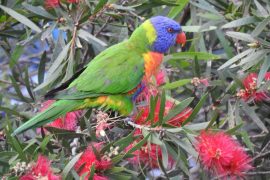