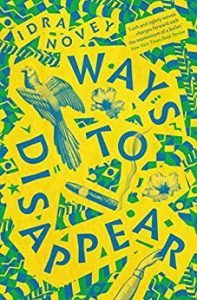 Ways to Disappear by Idra Novey: When acclaimed Brazilian author Beatriz Yagoda disappears (last seen sitting up a tree smoking a cigar) her American translator Emma Neufeld feels compelled to leave snowy Pittsburgh and dour live-in boyfriend to try and find her. And whilst Beatriz’s daughter Raquel, who has never read any of her mother’s work, is unimpressed by Emma’s sudden arrival, not so brother Marcos who welcomes her warmly. Very warmly. Throw in a ruthless loan shark, a time-worn publisher and a surprise unpublished manuscript, plus delightful “asides” about the art of translation peppered throughout the novel, and you have a wonderfully entertaining read. Novey is no stranger to the written word. She is herself a celebrated translator (Portuguese, Spanish and Persian) as well as an acclaimed poet. Whilst this is her debut novel, published in 2016, Novey last year released She Never Knew, named as one of the best books of 2018. Ways to Disappear is published by Daunt Books. 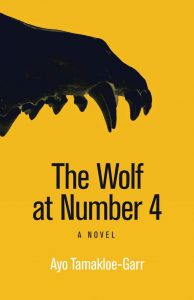 The Wolf at Number 4 by Ayo Tamakloe-Garr: Tamakloe-Garr  is one of a new wave of African authors like Tendai Huchu (The Hairdresser of Harare) deservedly beginning to reach a wider international audience.  His debut, The Wolf at Number 4, is set in the 1990s in a quiet Cape Coast in Ghana where disgraced teacher Desire Mensah has sought refuge from her past. She forms an unlikely bond with Wolfgang “Wolf” Ofori, a precocious 11-year-old boy genius who is dazzling the country with his performance in the national school’s competition, and overwhelmed by the chance of finally finding a husband in his older brother (which has the added bonus of keeping her mother happy). The story, a blend of humour and unsettling Gothic darkness, zips along as Desire’s life descends further and further into chaos and there’s a doozy of a twist at the end. The Wolf at Number 4 is published by Ohio University Press and is part of the Modern African Writing  series.